What is MagnaCarta worth? Exactly $21,321,000. We know because that’s what it fetched in a fair public auction at Sotheby’s in New York. Twenty-one million is, by far, the most ever paid for a page of text, and therein lies a paradox: Information is now cheaper than ever and also more expensive.

Mostly, of course, information is practically free, easier to store and faster to spread than our parents imagined possible. In one way, Magna Carta is already yours for the asking: you can read it any time, at the touch of a button. 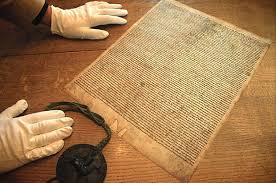 It has been preserved, photographically and digitally, in countless copies with no evident physical reality, which will nonetheless last as long as our civilization. In another way, Magna Carta is a 15-by-17-inch piece of parchment, fragile and scarce and practically unreadable. Why should that version be so valuable?

Magna Carta itself is a nice reminder of how costly it once was to store and spread information. Its very purpose was to get the king’s word down in tangible form, safeguard it, enshrine it and then get it out to the countryside. In 13th-century England this required the soaking, stretching, scraping and drying of sheepskin to make vellum, the preparation of ink from oak galls and painstaking penmanship by professional quill-wielding scribes. Then copies had to be made the same way — there was no other — for dispatch to county seats and churches, where they were read aloud.

At that point the value of Magna Carta resided in its words: their meaning and their very real political force, beginning with King John’s greetings in 1215 to “his archbishops, bishops, abbots, earls, barons, justices, foresters, sheriffs, stewards, servants and to all his officials and loyal subjects” and continuing with a message never before heard — a setting of limits on the power of the state. It made a grant of rights and liberties to all free men, irrevocably and forever, at least in theory. The document didn’t just express that grant or represent it or certify it. The document was the grant — “given by our hand in the meadow that is called Runnymede.”

The value of the particular item sold at Sotheby’s eight centuries later is entirely different. It’s a kind of illusion. We can call it magical value as opposed to meaningful value. It’s like the value acquired by one baseball when Bobby Thomson batted it out of the Polo Grounds. A physical object becomes desirable, precious, almost holy, by common consensus, on account of a history — a story — that is attached to it. (If it turns out you’ve got the wrong baseball, the value vanishes just as magically.)

The $21 million Magna Carta is actually a copy, made in 1297. In fact, it is surely a copy of a copy, with errors and emendations introduced along the way. And yet it is also an original: issued officially and afresh in the name of King Edward I. Sotheby’s reckons that 17 “original exemplars” from the 13th century survive today, most preserved in England’s libraries and cathedrals. Hundreds more have been lost — to rats, fire and reuse as scrap paper.

Even as a copy, it’s one of a kind. “It was like someone said ‘Mona Lisa,’ ” explained the previous purchaser (Ross Perot, 1984, $1.5 million). In advance of the sale, Sotheby’s called Magna Carta “a lamp in the darkness, a glowing talisman of our human condition, a sacred icon of our human history.” Just so. It’s magic. Religious relics, like the Shroud of Turin, gleam invisibly with the same magic. On a smaller scale so do autographs, coins, rare photographs, Stradivari violins (unless you think you can recognize the tonal quality of 300-year-old wood) and clothing off the backs of celebrities, like the spare wedding dress (ivory silk taffeta) that Diana might have worn but didn’t (2005, $175,000).

The same free flow that makes information cheap and reproducible helps us treasure the sight of information that is not.

All these artifacts share the quality that Philip K. Dick, in his 1962 novel “The Man in the High Castle,” calls historicity, which is “when a thing has history in it.” In the book, a dealer in antiquities holds up two identical Zippo lighters, one of which supposedly belonged to Franklin D. Roosevelt, and says: “One has historicity, a hell of a lot of it. As much as any object has ever had. And one has nothing. Can you feel it? … You can’t. You can’t tell which is which. There’s no ‘mystical plasmic presence,’ no ‘aura’ around it.”

Of course, more people can afford rarities — rarities are a bigger business than ever — now that being a billionaire doesn’t even guarantee a spot in the Forbes 400. Magna Carta’s buyer, David M. Rubenstein, a founder of the Carlyle Group, was No. 165 last year with a reported fortune of $2.5 billion. He plans to return the document to public view at the National Archives, which has had it on display, along with other iconic texts like the Emancipation Proclamation, the Marshall Plan and the Apollo 11 flight plan.

But the growth in the ranks of the superrich does not explain the hypertrophy in magical value. Just when digital reproduction makes it possible to create a “Rembrandt” good enough to fool the eye, the “real” Rembrandt becomes more expensive than ever. Why? Because the same free flow that makes information cheap and reproducible helps us treasure the sight of information that is not. A story gains power from its attachment, however tenuous, to a physical object. The object gains power from the story. The abstract version may flash by on a screen, but the worn parchment and the fading ink make us pause. The extreme of scarcity is intensified by the extreme of ubiquity.