In light of the big news 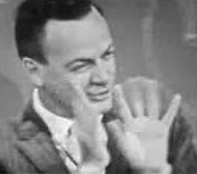 from LIGO about gravitational waves—published with the most wonderfully businesslike title, “Observation of Gravitational Waves from a Binary Black Hole Merger“— one can’t help but think of a remark of Feynman’s, recounted in Genius. He was giving a talk at a crowded conference, trying to emphasize the enormous (almost unimaginable) difference in strength between the gravitational and electromagnetic forces.

“Gravity is weak,” he said. “In fact, it’s damned weak.” (At that moment, somewhere in the back, a loudspeaker crashed to the floor.) “Weak—but not negligible.”