I learned the hard way that after one writes a book disgruntled readers will ask, “All right—but what is [X], anyway?” (where X may be, for example, chaos or information). Apparently one has failed to provide a succinct definition of the thing in question.

“What is time?” This may be the most difficult of all.

So you can imagine my relief at discovering that the United Kingdom of Great Britain and Northern Ireland has settled the question legislatively. In 1880, “the Queen’s most Excellent Majesty” (Victoria, of course), by and with “the advice and consent of the Lords Spiritual and Temporal” (Time Lords!), enacted once and for all the Statutes (Definition of Time) Act. It declares itself to be “an Act to remove doubts as to the meaning of Expressions relative to Time occurring in Acts of Parliament, deeds, and other legal instruments.” 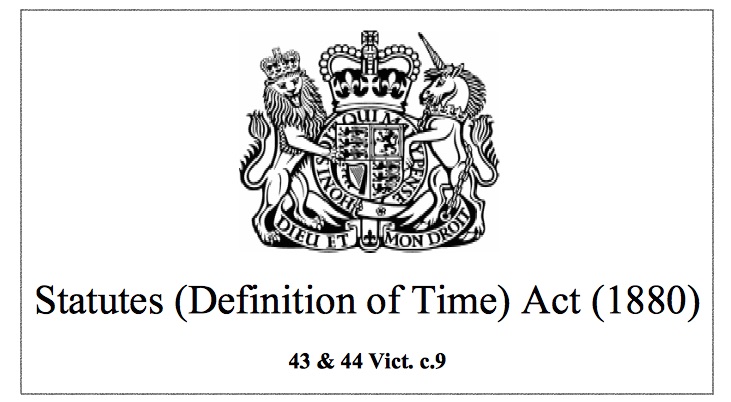 Removing doubts about the meaning of time is an ambitious goal. Alas, it turns out that the question answered by this legislation is not What is time? but a related and simpler question, What is the time?

Answer: The time, in Great Britain, is Greenwich mean time. Oh, well. That’s a little deflating. Even this simple Act, however, failed in its hope of removing all doubts.

A few years later—to be exact, on August 19, 1898, at 8:15 PM (Greenwich mean time)—a man named Gordon was nabbed, nicked, busted, and collared by the police in Bristol for riding his bicycle without a lamp. The local law clearly stated that every person riding a bicycle (which, by the way, was defined as a “carriage”) shall carry a lamp, so lighted as to afford adequate means of signaling the approach of the bicycle, during the period between one hour after sunset and one hour before sunrise. Got it? On the evening in question, sunset in Greenwich had occurred at 7:13 PM, so Gordon was caught riding lampless a full hour and two minutes after sunset.

This did not sit well with the accused man, because the sun set ten minutes later in Bristol than in Greenwich: 7:23, not 7:13. Nonetheless, the Justices of the city of Bristol, relying on the Statutes (Definition of Time) Act, found him guilty. After all, they reasoned, everyone would benefit by having “a readily ascertained time of lighting up.”

With the help of his solicitors, Darley & Cumberland, poor Gordon appealed. The question before the Court of Appeals was described as “an astronomical one.” And the appellate court saw it his way. They ruled that “sunset” is not a “period of time” but a physical fact. Justice Channell was especially insistent:

According to the decision of the Justices, as it stands, a man on an unlighted bicycle may be looking at the sun in the heavens, and yet be liable to be convicted of the offence of not having his lamp lighted an hour after sunset.

Next question: what is “noon”?