You write a book; time passes. Toward the end of Genius I quote a bit of doggerel by “a young friend” of Richard Feynman:

You are old, Father Feynman …
And your hair has turned visibly grey;
And yet you keep tossing ideas around—
At your age, a disgraceful display!

Where did I find that? I have no memory.

Now comes email from Tom Ferbel, a distinguished particle physicist at the University of Rochester, claiming authorship. Ferbel has been around: Fermilab, CERN, the  Max Planck Institute, SLAC—wherever a big high-energy collider can be found. In 1977 he and Feynman met at a conference on multiparticle dynamics in Kayserberg, France. Feynman was 59—about this old: 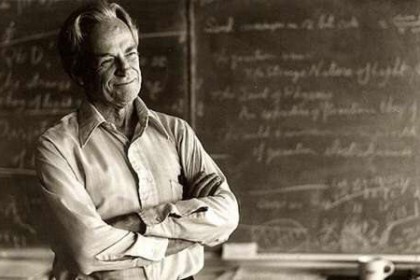 Also present was Giuliano Preparata, a 35-year-old firebrand from Padua by way of Rome and Princeton, then working as a theorist at CERN. Apparently Preparata and Feynman got into a shouting match about quantum chromodynamics, then in its heyday, and the hypothetical elementary particles known as gluons. (Gluons are needed to bind quarks. They’re the glue in the strong nuclear force—get it?) For some reason, Preparata really didn’t like gluons.

Ferbel immediately set down his poem (with apologies to Lewis Carroll) while sitting in a bus full of physicists. “An amazing confrontation,” he says in his email. “Their argument had to do with QCD, and eventually led to Preparata’s irate and disgraced departure from the conference. I lost the poem, and was very pleasantly surprised to find it in your book.”

Here then, with Professor Ferbel’s permission, is the poem in its entirety:

You are old, Father Feynman, Preparata declared,
And your hair has turned visibly grey,
And yet you keep tossing ideas around —
At your age, a disgraceful display!

In my youth, said the master, as he shook his long locks,
I took a great fancy to sketching:
I drew many diagrams, which most thought profound
While others thought just merely fetching.

Yes I know, said the youth, interrupting the sage,
That you once were so awfully clever;
But now is the time for quark sausage with chrome —
Do you think you can last-on forever?

In your words, my young fellow, the crone did retort,
As his face turned perceptibly redder,
In your words I detect an impatience, I’m sure,
Which makes me decidedly madder

You are old, quoth the youth, in his accented speech,
While eyeing the throne of the Master:
Let me help you relinquish your sceptre next day.
Or would you prefer that much faster?

No, thanks, Giuliano, the sage did rebuff.
Enough of your own brand of sass:
Do you think I can listen all day to such stuff?
Be off, or I’ll kick-in your ass!