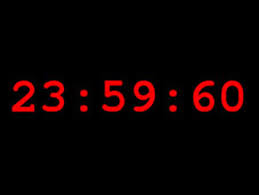 I AM IN THE DIRECTORATE OF TIME. Naturally, I am running late. I hurry past a climate-controlled vault in which the world’s No. 1 clock is silently assembling each second from nine billion parts. I am ushered into the presence of Gernot M. R. Winkler, who recently retired as director of the Directorate of Time. (The Government has not been able to find a replacement.) He looks across his desk—sharp blue eyes, craggy features, white hair—and says, “We have to be fast.”

In the era of the nanosecond, timekeeping is serious business. The Directorate, a division of the United States Naval Observatory, has scattered its atomic clocks across a colorfully manicured hilltop near the Potomac River in Washington—the Master Clock and 53 others. This ensemble, consulting continuously with counterparts overseas, has achieved a precision in measurement that surpasses anything else in science. The seconds pass here with a margin of error each day that is smaller than a hairbreadth in the distance from the Earth to the Sun. In a million years, the Master Clock might gain or lose a second.

“I tell you, it wasn’t on a human scale when we were measuring time to a millisecond, and now we are down to a fraction of a nanosecond.”

Time used to be fixed by astronomical reference points — Earth spins once, call it a day. By consensus among scientists and military officials, the absolute reference frame has shifted from the stars to the atomic clocks in their vaults. Stars drift, and the Earth shivers ever so slightly — generally its rotation slows each year. Because the clocks, not the Earth, now provide the ultimate authority, the Earth gets out of sync.

Leap seconds are growing more common. Eventually—in the distant future—there will be at least one every year, and then two, and so on, as the Earth continues to slow. It didn’t have to be that way—in fact, until 1970, the second was always one-86,400th of a real day. The atomic clocks were retuned. The second lengthened a tiny bit each year. This did not trouble most of us, but it did start to annoy physicists: Come on, guys, a second is a second—give me a real SECOND.

That the exactitude of modern timekeepers defies anything in human experience is cheerfully acknowledged here at the Directorate. When events occur within thousandths of a second, we cannot tell the past from the future. “I tell you, it wasn’t on a human scale when we were measuring time to a millisecond, and now we are down to a fraction of a nanosecond,” Winkler says. “Can you miss a plane by a millisecond? Of course not.” He pauses to think. “I missed one by five seconds once.”

Still, humans seem to crave the precision that is available. Internet users can set their computers to update their clocks according to the Directorate’s time signal—and the Directorate now fields more than 300,000 electronic queries each day. By pinging back and forth across the network, the software can correct for delays along the phone lines between the clocks and your PC. The truly time-obsessed used to keep their watches accurate to within seconds; now they keep their computers accurate to within milliseconds.

Nanosecond precision is needed for worldwide communications systems and for navigation by Global Positioning System satellite signals, where an error of a billionth of a second means an error of a foot—the distance light travels in that time. Cellular phone networks and television transmitters need fine timing to squeeze more and more channels of communication into precisely tuned bandwidths. The military, especially, finds ways to use superprecise timing. It is no accident that the Directorate of Time belongs to the Department of Defense. Knowing the exact time is an essential aspect of delivering airborne explosives to exact locations—individual buildings or parts of buildings—thus minimizing one of the department’s crucial euphemisms, collateral damage.

“This is extremely important,” Winkler says, the accent of his native Austria breaking through. He slashes his hand through the air in a karate gesture. “We want to be exact.”

It is often said ironically here, and Winkler says it again, that if you have only one clock, you automatically have perfect time. In the real world, no single clock can serve as a reference. The Directorate’s official collection of cesium atomic and hydrogen maser clocks—54 now, though clocks can come off the bench or get sent down to the minors as their performance warrants— serve as independent witnesses, consulting one another electronically every 100 seconds.

“Different power sources, diesel generators, individual batteries,” Winkler says. “Backup monitor stations. In case we are wiped out by some major disaster, we can carry on.” Official time comes not from the Master Clock alone but from the group, statistically merged. The United States’ statistical contribution to worldwide official time is 40 percent, by far the largest share, with the rest coming from time agencies in other nations.

Few scientific institutions are so intensely focused on so pure a goal. Keeping the right time brings together an assortment of technologies and sciences. The Directorate’s astronomers study the most distant quasars—not for the theoretical subtleties that interest astrophysicists, but for their fixedness in the sky. The stars may wander, but the Directorate’s favorite 462 quasars provide as rigid a frame as can be found. Earth scientists study the slowing rotation and the occasional wobble—a problem that comes down to watching the weather, because nothing affects the planet’s spin in any given year as much as wind blowing on mountains.

And atomic scientists continue to perfect those clocks.

“The clock is a machinery which repeats the same process over and over again,” Winkler says. “Now, the ‘same process’ means ‘undisturbed from the outside.’ The observation itself is a disturbance and we must keep that to a minimum. Magnetic fields, humidity. It’s really technology driven to the utmost perfection in respect to control of a process.”

I cannot resist asking a few questions about the director’s psychological motivation. He cooperates: “Accuracy, precision, control—this is something which is to me esthetically pleasing.”

Are you a punctual person?

What kind of watch do you wear?

“I don’t need to. This would be an admission of defeat.”

Nevertheless, there is a reasonably accurate clock on the wall just behind my left shoulder, and I see Winkler glance at it. My half-hour is up.